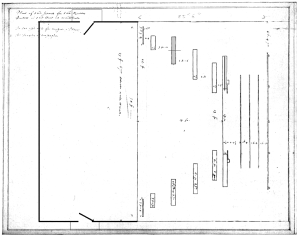 The model of early Restoration staging referred to throughout this site, the LIF (Lincoln’s Inn Fields) model, is based on John Webb’s 1665 Hall stage at Whitehall. Graham Barlow’s research has demonstrated that the original building (Lisle’s tennis court) which was converted into William Davenant’s LIF theatre was larger than had previously been thought and that the scenic arrangement shown by Webb could fit into the LIF space.[1] I am not proposing a duplication of the Hall stage in these pages (in any case it would be the other way round as LIF was converted in 1661), I am arguing only for a similar scenic arrangement. Accordingly, the LIF model (see illustration) has four wing positions per side with a maximum of three wing shutters per position (in a three-grooved frame), three pairs of lower backshutters at a single upstage position, and behind them a discovery space capable of revealing a scene of relief, actors, props, or a combination of all three if required. Upstage of the discovery space is a changeable backcloth. Downstage of the frontispiece (proscenium arch) I add to Webb’s stage and provide a forestage at least 15 feet deep, and on each side of the forestage a physical door of entrance and its associated balcony (rather than the generally assumed two per side). It is not possible to infer information about borders (aka soffits) from the stage directions of early Restoration plays and their presence or absence does not affect the operation of the model.

One thought on “LIF Model”